This temple is located at the highest point of Baturagung Hill. This is the best place to see the view of Prambanan plains at the north and karstic Sewu Mountains at the south. Ijo Temple has a main temple with 16 Candi Pewaras. A representation of Lord Shiva and his wife in the form of Lingga-Yoni is in the garbhagreha. Although the temple is dedicated to Shiva, but theres two stone images of Vishnu’s Avatars – The Narasimha (half lion man) and The Wamana (dwarf) – were found next to Ijo Temple. Recently the Vishnu images are stored at the archaeological office of Yogyakarta. 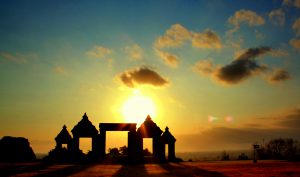 Sambeng village is a small town which has so many potential, almost all residences are a farmer with Chili, Corn, Rambutan, Turmeric, Ginger, Albasia, Mahogany and Teak as […]

Kembanglimus village is located about 3 km from Borobudur Temple with Menoreh Hills as the background and beautiful natural landscape. Almost all residences are a farmer with papaya, […]