The rich giving charity to the poor

If we look further, we can see that the reliefs found at the foot of the Borobudur Temple are related to the essence of Buddhism. The reliefs that decorate the foot of the temple describe teachings about the cause of human suffering and the result of human actions in the next life. By comparing the relief sculptures with Buddhist or Sutra scriptures, it can be seen that temple reliefs are connected to each other to tell a story that represents the Mahakarmavibhanga Sutra, or the law of suffering and the result from deeds.
The 160 panels that contain scenes in relief tells about everyday life, deeds that produce good and evil, the consequences that exist on the act, as well as heaven and hell. 23 of the entire panel are a quote from the Mahakarmavibhanga Sutra. As shown by the word karma, this relief describes the various human actions and their effects. Some scenes can be interpreted as a “pretitya samutpada” symbol, which refers to the Bhacavakra mandala from Tibet.

A dove, a peacock, a parakeet, a horse, a buffalo and a musk deer are reincarnations of people who sinned 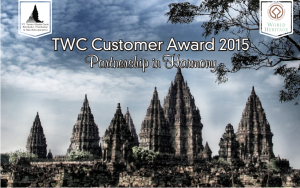 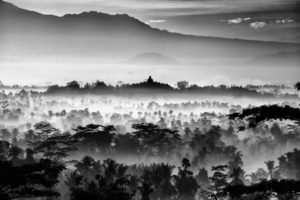