The ancient Javanese have specialists who are experts in temple and home construction techniques. The inscription mentions various kinds of special tools used for woodworking such as various axes. Carpentry seems to be very well developed in ancient Java. This is not surprising given the variety of timber trees available in this place.
They built houses from diverse materials, from bamboo to wood. Many types of wooden houses and other buildings are carved on the reliefs of Borobudur Temple. The architects have made a special study of the buildings in this relief. Sources from data on the capabilities of the ancient Javanese in building technology can only be learned from this relief since the building itself is not present.

As it stands today, bamboo grows heavily in Java. Bamboo also used as the main material in order to made building because wood is a more expensive material. Specific locations of the growing bamboo spots can be seen from the name of an area, such as Gunungpring Village (bamboo forest) near Borobudur. What is interesting is a 9th-century inscription connected to Mendut Temple near Borobudur mentioning a place called Venu Vana, Sanskrit for the bamboo forest. 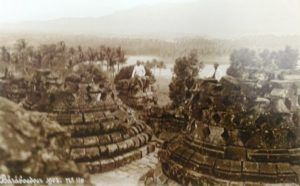 Javanese people also practice hunting and gathering activities in addition to farming and raising. People hunt birds by shooting them with a small bamboo pipe called “tulub” and catch fish in a river with a traditional tool called “wuwu” made of bamboo and nets. Fishnets or webs are made from ropes of certain trees. Although these ropes did not survive in archaeological records, archaeologists were able to study the various types of ropes and threads made through the illustration of webs and ropes on several potteries.

An inscription from the beginning of the Borobudur period mentions some special skills that use rigging. One such skill is to make a net, and the other is “manganamamnam”, a word that might mean the making of baskets, mats, and other objects of bamboo and bark. Another handicraft is making umbrellas that are shown in reliefs in hundreds of types. The umbrellas are produced for different needs based on different social status.

In a relief detail, a royal officer of Hiru sheltered in a place called Hiruka. The house in this illustration is not a modern type of Javanese house. This house is more like a house used by the Batak and Minangkabau people in Sumatra and Toraja in Sulawesi. It stands on stage and has a saddle-shaped roof. It may be that this kind of house is commonly used in Java in the 9th century. 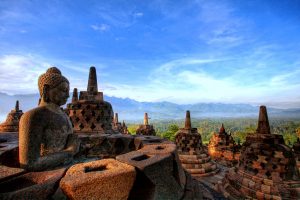 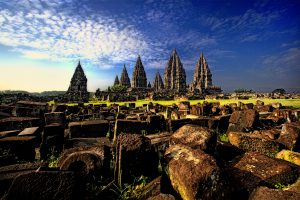 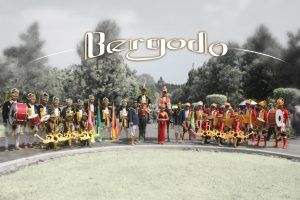